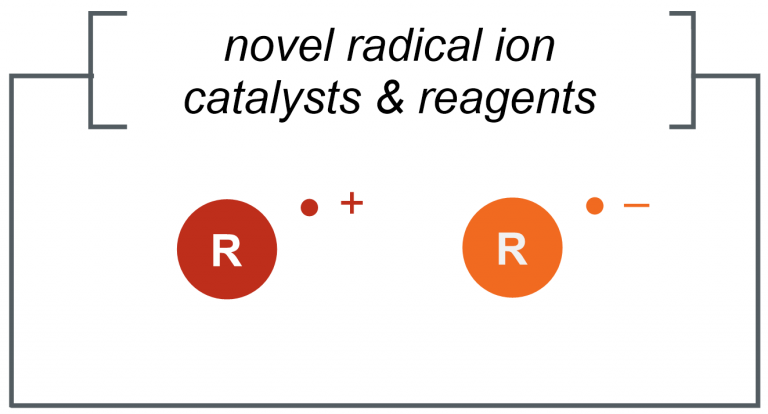 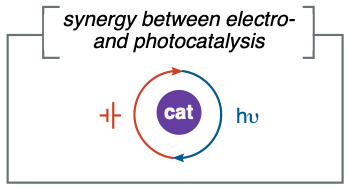 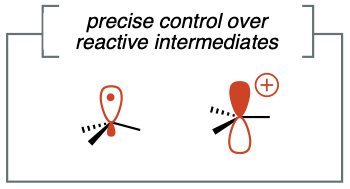 The primary focus of the Wickens group is the discovery and development of new strategies to address longstanding challenges in organic synthesis. Our central hypothesis is that classically reactive species, such as radical and ionic intermediates, can be tamed and deployed as potent catalysts and reagents. Our recent efforts have focused on the electrochemical generation of new radical ions that exhibit extreme reactivity without sacrificing chemoselectivity. These investigations have led us to explore how electrochemistry and photochemistry can be synergistically leveraged to enable otherwise infeasible reactions and how potent dielectrophiles can be cleanly generated from alkenes. Each of the projects we pursue balances mechanistically guided development of novel strategies with the introduction of useful new synthetic methodologies.

Our group is interested in leveraging electronically destabilized intermediates to unlock challenging reactions while maintaining control over selectivity. Photoredox catalysis has proven a powerful technique to achieve functional group tolerance as well as exquisite selectivity for radical chemistry. However, substrate classes that demand extreme potentials for activation remain outside the scope of photoredox catalysis due to the finite energy available from visible light. Our research focuses on leveraging a new family of photocatalysts–organic radical ions–that are mildly reactive in the ground state but become potent redox agents upon excitation. This supplements the energy of visible light and unlocks previously inert substrate classes to radical chemistry while maintaining the selectivity profile characteristic of traditional photoredox catalysis. 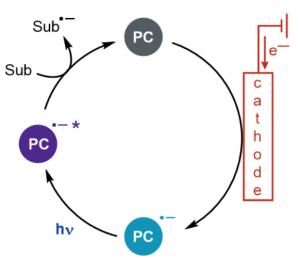 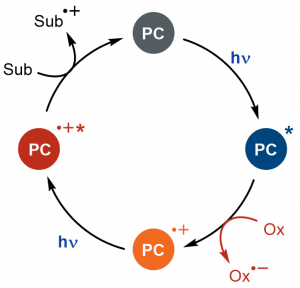 Oxidative alkene difunctionalization reactions are powerful and broadly employed synthetic transformations. However, the conventional strategies to promote alkene oxidation preclude the use of many common functional groups due to their oxidative sensitivity. Our research focuses on a developing a new strategy wherein alkenes are anodically transformed into a metastable dicationic adduct with thianthrene. This electrochemically-generated dielectrophile can then engage innately nucleophilic functional groups, such as amines, in otherwise difficult bond-forming reactions. Our first validation of this approach produced aziridines by coupling terminal alkenes with a variety of commercial primary amines.